The day began with me teaching Body Intelligence with a super cool Madonna head mic which they found very cool. I decided today to tell the girls my story briefly of what I was doing when I was their age. When I was young there was a difficult trauma in our family and so we went to England when I was 6.

I couldn’t talk to the other children because I couldn’t speak English and found it very difficult and I was sad and alone when I was the same age as the girls. Then my mother took me to dance classes and I remember when the music began and I started to dance I felt happier than I’d ever felt before and this helped me so much all my life.

And that’s why I am always telling the girls to love themselves and be their own best friend. Because sometimes life is difficult or sad and if you have your own loving support things will be so much easier.

I asked everyone to know their uniqueness. That we grown ups take all of our lives to realise that we are special and unique with many lovely gifts and these are so precious. So realise this today and know your own loveliness. Take important time to discover your beauty and your light.

Body Intelligence is a leadership tool that combines mindfulness, movement, energy balancing and play to connect to all of the multitude of intelligences available which are: emotional, social, mental, physical, intuition and spiritual.

I blended the session to incorporate kicks, punches and blocks to music in order to illustrate this and connected to our personal power, our boundaries and our powerful YES and NO! The girls enjoyed the martial arts elements and we’re still doing the moves into the evening – thankfully not on each other!

Patricia Alvarez Novoa, corporate affairs senior manager from Toyota came to talk to the girls about innovation and designing cars for the future.

When she asked them what they think innovation is they impressively said:

I found these comments incredibly intelligent! 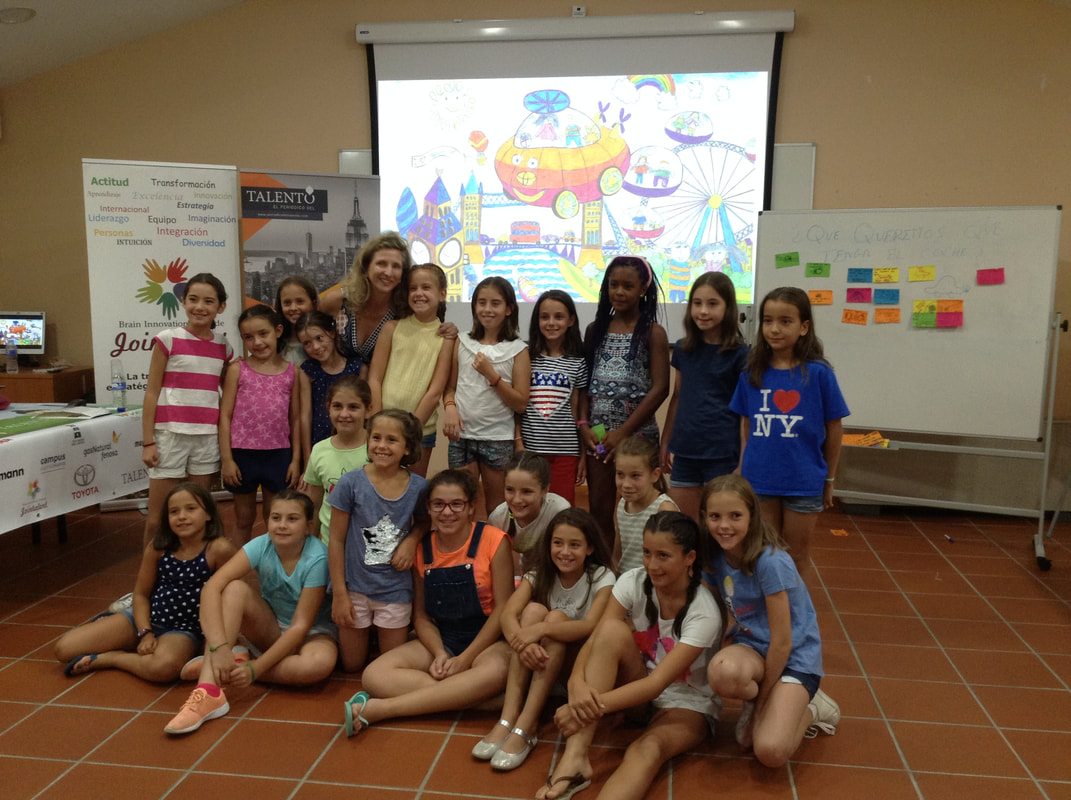 She then gave examples of innovation from a standard ice cream in a cone, to one that was pink and foot shaped! A woman scrubbing the floor on her hands and knees to the innovation of a mop! So a person has an idea of how to improve something to make life easier for people and then has the courage and confidence to take their idea to people that can make it and go for it.

Then she told the story of a man long ago in Japan called Kichiro Toyota who came from a simple community in Japan. One day he went to the U.S. And to his surprise and shock he saw the roads full of cars! In Japan there were only coach and horses on the roads. He was transfixed by this and wanted to make cars too so he got one, took it apart and then made one exactly the same!

He tried to sell these in Japan but had no success. He went to America and again didn’t sell any either but he didn’t give up, he carried on and thought deeper. Ok, in the US there are large wide motorways, and also the Americans like everything to be BIG. So he adjusted his designs while leaning from others.

Eventually they came up with a design that really worked, an all terrain hybrid. So they began to build large factories to build many cars at once. Until now the brand of Toyota is no. 1 in production.

Wow, what a story! There’s one very determined visionary…

The girls shared that it’s important to keep trying and don’t worry if it doesn’t work. Don’t give up.

Patricia then asked the girls for help. The car designers in Japan can use your ideas! How would you like to get about when you are 40, as old as your mums (that part made me smile as I am older than that).

The girls went off to brainstorm and got the following ideas which they bravely presented to everyone from the front of the room:

– A flying cabin so that you can get places quicker
– A sunbathing windsurf board and if it’s too hot it has – AC and a cover, against UV Ray’s m
– A train that goes through space, goes to the moon
– A flying back pack so you don’t have to carry it
– A car that folds away and I put it in my pocket
– A flying bike with pedals and wings
– A rubber car so if you crash nothing happens, or you bounce
–  Car that changes into anything. For example roller skates or a bracelet
– A self flying plane/office that carries 200 people that takes you wherever you want.
– A theme park car
– A spa car
– A car that changes colour (there already exist cars that change colour and you can paint them)
– A car with all the colours of the rainbow
– Camaleon lion bed

The brainstorm then went into a second round.
“We can’t fly with the cars but think how you’d like cars to be? Most car designers are men, so we need women designers, think about it.”

And the girls said:

– A car that massages you when you’re going along. Wow! I loved that! Patricia said that some cars actually do that. One girl asked if it was cool, she said, yes, very!
– A car that opens the door with just a sound from you. Another girl said but what about the thieves who make the sound and steal your car? Patricia said that her Toyota, she just touches it and it opens! You have to have the key in your car.
– A car with a basket for playing basketball (I just love how innocent this idea is)
– A car that looks normal outside but inside it puts the seat belt on you winds the windows down for you
– A car that is of nature that’s made from trees and plants. (How enchanting) and it only requires water to go.
– A car that is a bee that flies and gets pollen from the flowers and helps the bees because the bees are becoming extinct. A girl asked does it sting?
– A car that brings you water or a drink.
– A sofa-car
– A car that helps you to get ideas, made of rubber and doesn’t use petrol. It runs on water. Patricia said that there will be hydro cars soon.
– A car that has all the room of a house and goes under the water, like a cruise liner. One girl commented, so how much is that gonna cost then? She said 3 Euros. It will have a car park underneath it like the ferries and that is anti-mosquitoes.
– A car that is a helicopter so you don’t get traffic jams!
– A normal car that if you want to drive it has a steering wheel but if you don’t it drives for you. The Windows are waterfalls instead of glass. The exhaust pipe emits sweets not bad air (a girl asked about this making a mess) and she aptly responded that you can eat the sweets. It has a small window with a beach and then you can make yourself smaller and go to the beach! Amazing… It also has a luxury sofa that massages you. A car cabin like Mary Poppins bag so if you want a shower, a shower comes out. Patricia told us that there is a man in the US now who is working on a series of underground and overground tunnels to avoid traffic jams!

To conclude, don’t worry about being embarrassed about an idea, keep going and you’ll get what you want!

I found the creativity, innovation and playfulness delightful.
​
QUALITY CURRENCY

To close the day the girls were asked to write all of the names of each participant per page of their notebook and then to think of a quality that they most like and admire about them. The rules are not to comment on physical appearance and that the words have to be positive.

The pages are anonymous without your name on it so the person will just receive a pile of blessings.

This was very beautiful to see them take off and sit quietly along wall banks, on the grass and deeply contemplate on how to complement their team mates. I enjoyed playing the game too as the teachers also had to do it.

I am also reminded of another wonderful presence exercise that Santiago also taught which was to find a partner and look at them in the eyes and say, “I acknowledge you” and then the other does the same.

I have also done this exercise with just sharing eye gaze which is also very powerful although sometimes confrontational.

He then went on to invite the girls in partners to hug each other for over 5 seconds and explained that in this longer time of contact, happy hormones are released and you feel much much better.

So we’ve been enjoying the bear hugs too!

So many gifts, so much learning and so much valuable shared experience that the girls will always remember and so will we.